What a Blue will do...Spotlight Intro to Dr. Sharon Gilbert

It’s been a minute since I had the opportunity to compose a new story for my Spotlight Section but today is the day!

In order for you to fully grasp why this article has significance to my life now, I must give you a bit of background and a brief glimpse into ‘the adventures’ that led up to this point.

First of all, I am –according to the personality color chart- a true blue. I love promoting people, causes and things that I believe in and do so naturally. I love an adventure and most things that I do have to have some fun attached or I will lose interest in them. That’s real! I’m a textbook BLUE. Case in point, for my 40th birthday, I went white water rafting for the first time in the Ocoee River in Tennessee with dear friends from Atlanta. That was a real blast and of course that's me in the front of the craft holding on!

As for other adventures…well, let’s just say that I have had plenty (some I chose and some chose me) that took a toll on this small framed body of mine. For instance, I didn’t choose for that teenager to rear end me. She was speeding down a hill in Austin in her mom’s van - speeding mind you, because she was late to volleyball practice. 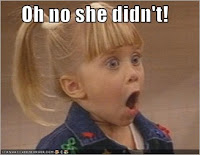 Nor did I choose to get hit again in Austin by a woman leaving the parking lot of the HEB grocery store. However I will say that when she didn’t stop after hitting us (I had my then 88 year old Granddaddy in the car) I did choose to follow her to her house and call the police. It is funny now but at the time I was hotter than a firecracker. As I was in pursuit of her I kept thinking, "I know she didn't!" It tickled Granddaddy. He even asked me what I was gonna do. I told him that I'd figure it out when we both stopped. That seemed to tickle him even more.

I remember the shock of the dispatcher who said, “She hit you and you did whaaat?”  When I said that I followed her to her house, I remember her asking me to remain in my car until an officer arrived. I complied without hesitation but I wasn’t moving until someone came and handled the matter, which they promptly did. 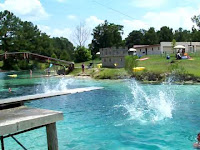 As a child who loved going to camp, I remember learning to dive off of the diving board one summer. At one point during my time on the board I became frightened, broke my form & un-tucked my chin to chest to look up. Quite frankly, I was wondering when I was gonna hit the water and ended up doing a backwards belly flop instead. The camp nurse recommended my sleeping on boards for the next few days because of it. 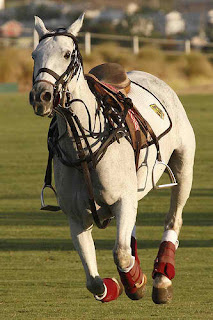 Over several summers at this same camp, I would have two more back jarring events. One included a runaway horse I was riding. I lost the reins when he surprised me by breaking into a full gallop, stripping them from my hands and over his head out of my reach. I held on as long as I could but eventually fell off.


Then, when I was older, no longer a camper but instead a counselor - there was the angry horse that I fought because he got wild on me, purposely running me into low branches trying to rid me as his rider. When that didn't work, he tried to crush my legs by slamming me into the walls of his stall. I think I was madder than he was because I hung with him. I remembered what my cowboy cousins taught me about breaking horses and we fought until he calmed down. That incident left me sore but feeling somewhat accomplished and did not diminish my love for the sport.

Then there was the zip cord incident. I had gotten on the high elements of the ropes course to show my campers that ‘it was no big deal---nothing to it.’ The truth is though once I got up 45 feet, I had to pray before I could actually jump off of the last element. But I did it and really loved the moments of ‘flying like Tinkerbell’ on the final apparatus.

All of that was good until some smart aleck counselor thought it would be funny to leave me hanging there, pretend he was walking back to main camp for lunch and not put the ladder where I could get down like he was supposed to do. That little antic left me flopping around and hanging upside down (unlike the picture to the right) and caused a severe strain/slight tear in a back muscle. It also led me straight to the emergency room. Mission accomplished in a sense, as I heard that some of my campers did follow my lead because I calmly excused myself and was careful not to share my truly agonizing pain until I was out of  their presence. My tongue lashing to the jokester and hospital bill ensured that he would never be so stupid again. No worries, however, I still ride horseback and swim as much as I can and still love it. 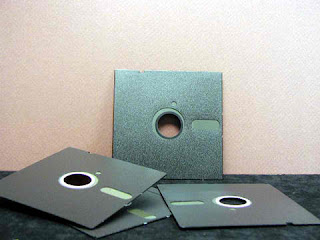 
Every day I would go to the Texas Ethics Commission and literally hand write information for my research which meant my head was down for 8 hours five days a week for several months. The result was three subluxated (out of line) vertebrae in my neck. It was bad. So bad, in fact, if you stood next to me and looked at my profile, my head looked like it was sitting in front of and not on top of my body.

That was when I first was introduced to a chiropractor. As long as I lived in Austin and had insurance – the company eventually fired me once I finished the research- I saw this great female chiropractor who helped my spine get back in line. That was over sixteen years ago. Periodically, since then I would get headaches that were bad enough to keep me in bed, which is not fun –especially for a blue!

After reaching 40, I sometimes feel terrible cramps in the same muscle in my back that I injured in my early 20’s and get headaches from the research project of my mid 20’s.

Today, however, I have a new story to tell about the wonders of chiropractic care. It’s the basis of the follow up story to come soon as I feature Dr. Sharon Gilbert in “Hallelujah and Hooray for these Helpful and Healing Hands of Houston.”

Now that you have the background, be sure to stay tuned for the rest of the story! 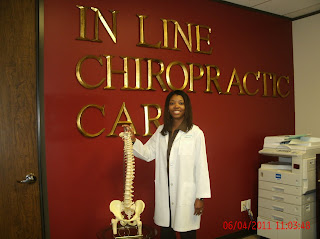 Posted by One in a Billion Consulting at 6:12 PM